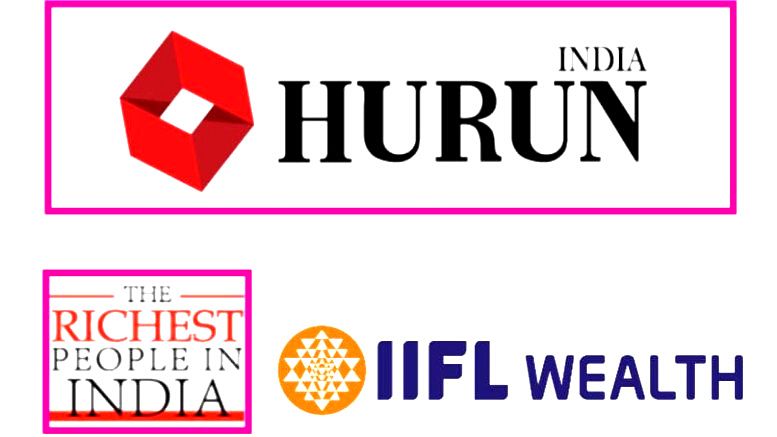 The IIFL Wealth Hurun India Rich List 2022 was published on September 21, 2022, by Hurun India Reports and IIFL Wealth Management Limited. People who live in India or were born and raised here are included in the List. It is the 11th annual List of India’s wealthiest people having figures as of August 30, 2022.

The IIFL Wealth Hurun India Rich List of 2022 has discovered that about 1,103 people are worth around INR 1,000 Crore, a rise of 62% in the past 5 years and the first time to cross the 1,100 mark. It has been reported that the aggregate wealth of the Hurun India Rich Listers, from when it began, has increased to INR 100 Lakh Crore for the very first time, which is greater than the collective Gross Domestic Products (GDPs) of the Kingdom of Saudi Arabia (KSA), the United Arab Emirates (UAE), and the Republic of Singapore.

Gautam Shantilal Adani, the founder and Chairman of the Adani Group, has been adding INR 1,600 Crore every day for the past year and having a net worth of around INR 10,94,400 Crore, surpasses Mukesh Dhirubhai Ambani, Managing Director (MD) and Chairman of Reliance Industries Limited, in securing the title of being the richest person in India.

Gautam Adani has risen to the 1st rank thanks to organic growth and acquisitions. The previous year, his fortune had increased by over 116% or INR 5,88,500 Crore. The 1st Gen entrepreneur’s fortune has climbed by 1440% during the past 5 years. The 7 public-listed businesses that make up the Adani Group have recently seen a huge market value rise.

Mukesh Ambani, who has seen his wealth rise 11% in the past year despite various setbacks like the Ukraine Invasion, has missed the top spot for the 1st time in a decade. His net worth has grown by 115% over the past 5 years.

Cyrus S Poonawalla, the Managing Director (MD) and Chairman of the Cyrus Poonawalla Group, the parent company of the Serum Institute of India (SII), has advanced 3 levels after seeing a 25% growth in his fortune, or INR 41,700 crore, over the previous year.

19-year-old Kaivalya Vohra, the founder and CTO of Zepto, has become the youngest person on the IIFL Wealth Hurun India Rich List of 2022. Previously, about 10 years ago, the youngest on the List was 37 years old, and at present, 19 years, showcasing the effect of India’s start-up revolution. The List consists of around a hundred founders of start-ups for the first time, with 40 years being the average age and an aggregate wealth of around INR 5,06,000 Crore.

People with a wealth of INR One Lakh Crore has decreased to just 12 this year (2022), compared to the Hurun India Rich List in the previous year, which was 13 people. In this year’s List (2022), there are about 221 Billionaires (USD), which is up four times since its launch 10 years ago, and dropped by 16 people compared with the previous year. It has been found that about 735 Indian entrepreneurs are self-made, which is higher than the previous year at just 659. About 602 people saw a rise in their wealth, including 149 fresh faces; on the other hand, 415 individuals perceived a decline in their wealth.

The Pharma industry is a major contributor of entrepreneurs in the IIFL Wealth Hurun India Rich List 2022 with 126 individuals, the Chemicals and Petrochemicals sector with 102, and the Software and Services sector with 84.

MS in Fintech – What Skills And Qualifications Do You Need

Gurugram (or Gurgaon), a city in Haryana, appeared in the Top 10 Cities bringing about the majority of entrants for the very first time. Mumbai has been ranked 1st on the List with 283 individuals, 2nd rank is New Delhi with 185, and 3rd rank is Bengaluru (or Bangalore) with 89.

Anas Rahman Junaid, who is the Managing Director (MD) and Chief Researcher of Hurun India, made the following comments:

The IIFL Wealth Hurun India Rich List 2022 trends show that India has boosted its defences against the worldwide crisis. One hundred forty-nine people joined the List of 1,103 people, who collectively have a net worth of INR 100 Lakh Crore, despite the Russia-Ukraine Conflict and the challenges posed by inflation.

India’s phenomenal wealth creation over the last 5 years, occurring when several other nations are stagnating or experiencing a recession, confirms its status as the “Engine Of Growth” in the world economy. It is also to be noted that the new entrants to the IIFL Wealth Hurun India Rich List 2022 have taken place when valuations of publicly traded and private limited firms are at an all-time low. In the previous 5 years, 60% more people have been added to the List. The country has been well-positioned to benefit from strong domestic demand, a politically stable environment, a suitable demographic, and manageable external debt.

Why Are Governments And Regulators Concerned About The Emergence Of Fintech?